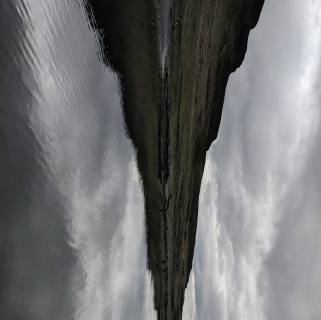 Ís is the result of my 2018 residency in Skagaströnd, Iceland. The initial concept sought to explore the 11th harmonic through 17-tone guitar, flute, field recording, and reduplication and resampling through recording techniques.  This gradually developed into using greater amounts of piano and keyboard sounds, often modified, synthesized sounds, often created from samples recorded in the area.  For example, Vatnajökull, features heavily the sounds of the glaciers and of footsteps on their snow.  Hrafná uses as a primary instrument a resampled metal tongue found on the shore of river Hrafná.  This same metal tongue worked to inspire the Bone Saga collaboration with Hadar Mitz, which featured more heavily the use of creating digital instruments from samples.  This project also led into Je ne serai pas sauvée with Maryse Andraos which initially used the outtakes from Ís, as well as a continuation of instruments created by local sounds, such as Cloches de guérison which uses an instrument created from modifying samples of the cemetery bell of Skagaströnd.